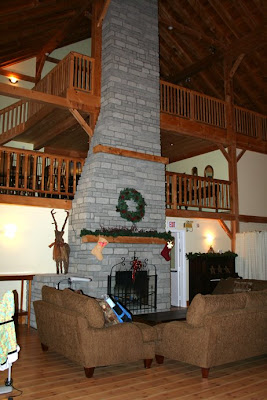 Wow, I had a fantastic weekend! This weekend was the Knowledge and Needles Retreat at the Timberhouse in Brighton. It turned out to be a perfect weekend for stitching since it rained so much. Several of us kept having aspirations for a walk, well that never happened. It seemed every time we mentioned the word walk, it would rain even harder! 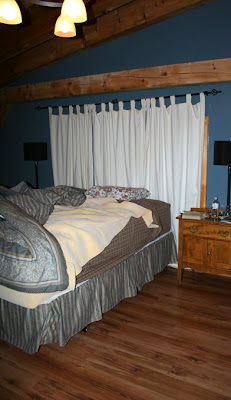 Ann and I headed over to the Timberhouse shortly after dinner and Beatrice was there shortly behind us. We got ourselves and our stuff settled into our rooms. We also took the opportunity to explore the other guestrooms before the other stitchers arrived. The Timberhouse was the perfect setting for a retreat! We had enough rooms for a total of 18 participants, a large gathering area (where they also hold receptions, etc) for us to congregate, and enough comfy chairs and couches for all! It wasn't long before Beatrice and I were stealing wing-back chairs, love seats, and a few tables out of the guestrooms. Before we knew it, it was 7pm and the gang was starting to arrive! 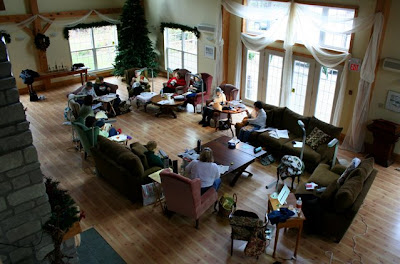 Boy did we stitch and eat! Friday night some of us stayed up until 1am. I had finished up my smalls exchange piece on Thursday night and during the day I had started my personal ornament exchange. I continued to work on that and made good progress. Saturday I tried to go to bed at a reasonable time (imagine I was ridiculed for going to bed before Ann!) but I couldn't sleep, so I got back up a while later and soon was joined by Beatrice... we stitched until 3AM! Saturday night we celebrated several HD's, everyone was just so productive! Sunday we had until lunchtime to stitch before the retreat started to break up.

Breakfast by the Timberhouse staff

Dan's Lunch
Food, boy oh boy! Friday night we had nibblies (pot luck), everyone contributed some sort of goodie! Breakfast on Saturday and Sunday was put together by the Timberhouse staff, they had some great healthy choices for me! We had a late lunch on Saturday and boy we were in for treat! Dan has been taking cooking courses over the last few months and is turning into quite the chef! Lunch consisted of a pork tenderloin cooked with apples, a baked apple, and red cabbage. Dessert was pana cotta. Dan certainly outdid himself this year the food was excellent!
Waiting for lunch! 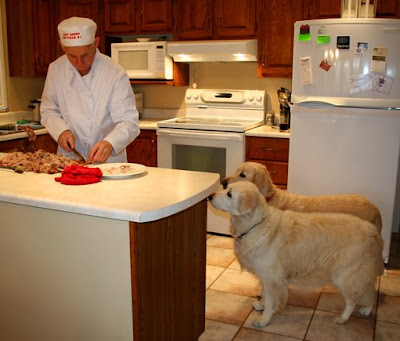 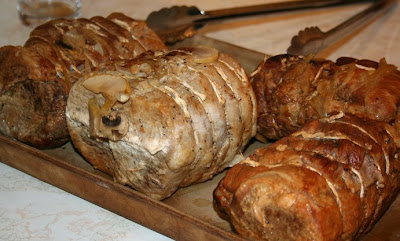 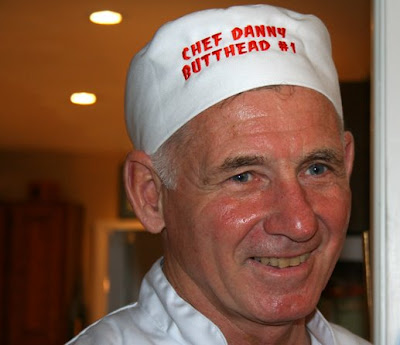 Dan - showing off his chef's outfit - hat courtesy of his partner in crime! 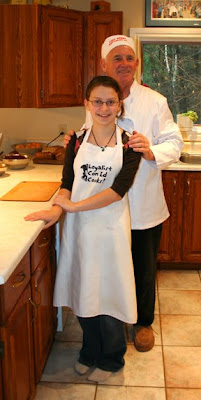 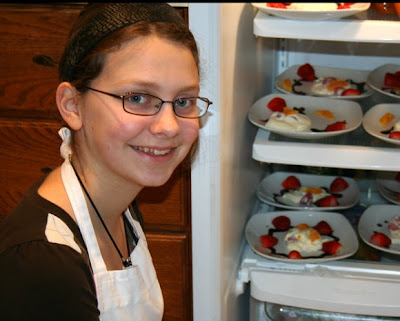 Dessert waiting to be served!
In the end my weekend was super productive! I finished the stitching on my smalls exchange, also the stitching on my ornament exchange. I finished my small tonight, and started on my Fair & Square round 10 piece! I'm catching right up!
Now I'm just going to let the pictures from this weekend do the talking! 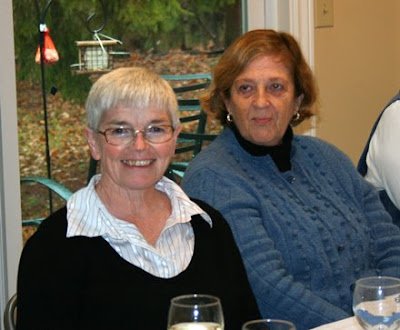 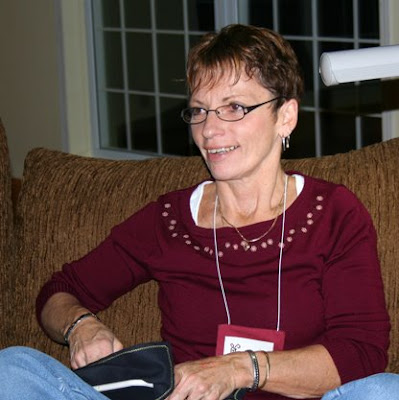 Wendy - So happy to be stitching! 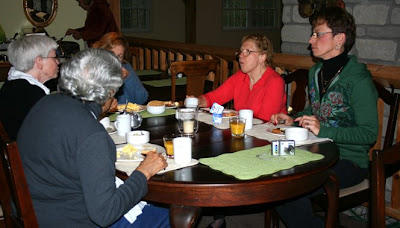 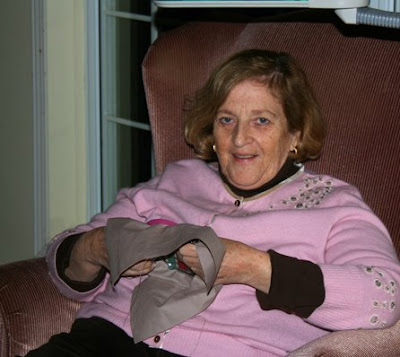 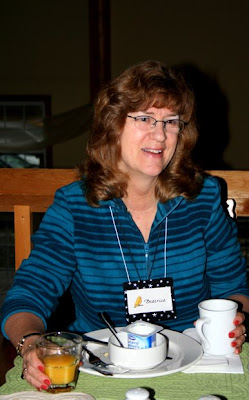 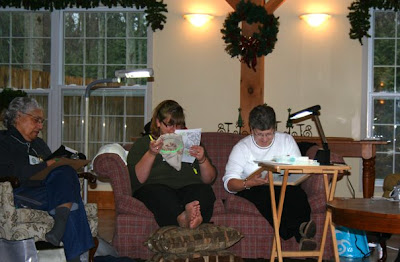 Rebbecca and her Mom
Posted by Dani - tkdchick at 11:58 pm

Looks like a wonderful time was had by all!

Sounds (and looks) like a wonderful weekend - I'm green with jealousy!! The house you stayed in looks lovely too. Glad you found PLENTY of time for stitching - can't wait to see photos of your HDs as soon as you've exchanged them

Glad you had a good weekend Dani. The Timberhouse looks lovely and as for the food..... WOW!

The timberhouse looks a wonderful place, gorgeous food too, love the pic of the dogs!

Great pics Dani! And didn't we have fun! I can't believe I actually stayed up later than you did for once!!!

Thanks for sharing your pics of the weekend. It looks and sounds like it was a fantastic weekend.

Great pics, Dani. The Timberhouse looks like a great place for such a large get-together, and lots of stitching room for everyone too!

Looks like a great time had by all - thanks for sharing! :)

LOL at the picture with the dogs!

Oh wow. Looks like you all had a great time. Glad that the Timberhouse worked for you all. Seeing the photos makes me miss everyone even more!

Looks like you had another wonderful retreat, and you took great pictures !

We missed you as well Kathy A! The photos look wonderful, the one of the fireplace looks lovely...I forgot to take one of it...I'm game to go again this weekend if you are!

What an amazing retreat, Dani! I'm so glad you were able to enjoy it and share some of the fun with us. :)

wow what a beautiful place to relax!

Yup we sure did have a good time. I'm ready to go again too!
Great photos as usual!

Looks like a fantastic weekend - you really did capture it with all of your photos.

What a fantastic retreat! I am so jealous Dani as it looks like everyone had a brilliant time.

What a beautiful place! Sounds like you had a great time!

Wow Dani, I am suprised you ever lost any weight going on all these lovely stitchy weekends. Was it quiet without Kathy lol.

What an awesome looking retreat, looks like you all had a wonderful time. I'm sooooo jealous.
Sue

What a great weekend you had. The place you stayed looks so relaxing and inviting. The food all looks so yummy!

Looks like you all had a fantastic time at the retreat. :0)