Another Weekend Comes and Goes

I had a great weekend.  It started out with Friday night's usual running around, starting with a trip to the gym then groceries and dinner out with Christin.  While we were out and about my friend Tracey wanted to know if I wanted to Antiquing with her on Saturday.  She got in touch with me about a change of plans for Saturday and I told her if she wanted to talk to me, that I was on the patio at a pub close to her house.  The next thing I know Tracey and her husband joined us for a beer and we firmed up our plans.  It made out for a really nice evening.

Saturday Tracey and I set out nice and early, we drove down to Cornwall to check out an Antique store where.  At this shop Tracey found one of the items she was looking for then we decided to cross the border into Massena, N.Y. and check out the mall there.  We got a great deal on a pair of jean capris, but I have to say the mall there is pretty disappointing.  Then we followed the river to Ogdensburg and crossed back into Canada there.  It really was a great day, it was casual and easy going not rushing from place to place.  Hopefully we'll do it again! 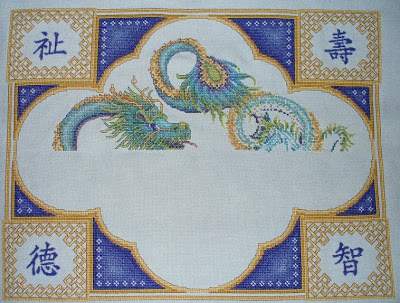 I did find some stitching time as well, and of course Celestial Dragon got all of my attention!  Here he is as of Friday before I picked him up. 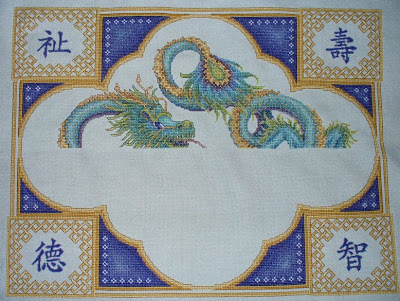 Here is is as of quitting time tonight I've finished all the cross stitch in this 1/4 and have started the backstitch.

I'm hoping for a good week ahead.  Things are wrapping up at work, exams are almost done and the grad ceremonies are later in the week followed by the end of year staff party and last staff meeting.  This means that soon all of the teaching staff at work will be gone and I'll be left alone to my music and whipping the library back into shape!  I've made a strong effort to eat well and move lots this week and I'm hoping I'll see the results at the scale on Tuesday!  I was down 1.5lbs this past week and if my body follows the trend it has been I'll be down again this upcoming week but up the following week.  I'm trying a number of things to shake it up a little and break this cycle I've gotten myself into!

Labels: life the universe and everything=42, Teresa Wentzler

CD looks incredible! I love how TW's dragons always have so much shading in them.

CD is progressing lovely. Sound like a lovely weekend.

Great progress! Glad you had what sounds like a fab weekend... x

CD is awesome Dani, and glad you had a nice weekend. Have fun getting the Library in shape for the fall and then you can stitch your way through the summer.
Be always in stitches.

Amazing progress on the Celestial Dragon ... it is looking quite wonderful. Sounds like you had a lovely weekend.

What a fun weekend you had ...and CD looks stunning , very nice progress!

It sounds like you had a very nice weekend. It's nice to be able to go for a drive without feeling rushed like you have to be somewhere.

Excellent progress on CD this weekend.

I bet you're looking forward to the end of the school year!

Ah, the end of the school year! I bet this is the best time for you, alone in your library, with all those books! I bet you have a wonderful summer plan, you are always so busy! CD is beautiful.

Your dragon is coming along so well, Dani. Wish I was there to help with the library organization--it sounds wonderful...Enjoy!

CD is coming along nicely, you are making really good progress with it! Sounds like you had a fun weekend and trust me I know all about whipping a library back into shape! We'll soon have our summer crowd in daily and they can sure trash a place quickly!

Sounds like a lovely weekend. And CD is gorgeous!

your cd is really turning out pretty! I love the colors in it!

Sounds like an awesome weekend for you - as for CD, I am in LOVE with it - those colours really pop ... it's almost tempting me to run and kit mine up! :P

We had a good one too ......I dumped the 60/60 and feel so much better. I'm still exercising and dieting but w/o the posting and worrying.

What a lovely weekend!
CD is looking fabulous - he'll be done in no time!

Sounds like it was a great weekend.
I was over to the mall in Massena recently and it hasn't changed any in about 10 yrs. There used to be a lot more good stores there years ago. Pretty sad now.
CD continues to look great! Keep it coming.

That's sounds like the perfect weekend to me. CD is looking really great, keep up the great progress.

WOW! CD is looking lovely and moving right along...hope you see the numbers you want but if not, remember, the number on the scale is not the most important thing in your life! Love ya, can't wait to see you soon!

Fine weekend and great progress, so the weight will be good too....
Erna xx

Sounds like a fab week-end.
CD is coming along great!

CS is looking lovely. Sounds like a fun weekend.
Schools here don't finish till mid July, although the university students are all packing up and heading off till September.

Sounds like you had a great weekend! Nice progress on CD, too.

Sounds like you had a wonderful weekend. CD is progressing beautifully.

Sounds like you had a lovely weekend. Love CD, the colours are beautiful.

Oh, a new hobbie - antiquing! What fun.
Love your progress on Celestial Dragon. He is such a handsome fella!

Everything's looking beautiful - I haven't been online in awhile and all your progress is just amazing me!!!

And we find ourselves at yet another weekend. Chores, chores and chores fill my weekend. Sigh, but hopefully I'll get all that I want/need done and can spend the week resting before the trip.
Your stitching is always incredible. I don't believe I'd ever have the patience to stick out a piece like this.
Have a great weekend!

I love the vibrant colors of Celestial Dragon and it's moving right along. That piece would take me forever to get done.

Sounds like you had a fun relaxing time, great way to spend a weekend. Nice progress on CD too, that is such a great piece. Good luck at the upcoming weigh in, I'm sure you'll do fine.
Sue