Yet again, I'm falling short on keeping up with my promise to you, to blog more frequently.  I feel like I spend more time doing "other things' then being home and stitching!  I've been spending more time exercising, focusing on my weight a bit more (proud to report a 2.5lb loss this week!).  I've also been busy with "Dominican Stuff".

If you keep up with me on Facebook from time to time a number of times I've mentioned that I like to think I'm a pretty smart girl.  However, every once and while I do things that are well -- not so smart.  Monday was another one of those instances, and its taken me a good couple of days to recover!  Once again, I'm teaching at Taekwon-Do!  I get the joy of working with the 4-6 year olds who are a riot!  Anyhow back to being not so smart... I taught my class, I stayed and assisted with the family class (there was over 20 students, a big class!), then I took the class afterwards.  After class my buddies Jason and Marc mentioned they were getting ready for the Army Run this weekend, doing the 1/2 marathon and that they were doing a 10K.  I've complained to them before that I wasn't invited in the past... so they invited me, and what did I say?  Well, yes.  So there I am running a 10K at 9pm.  It was a good run, and an eye opener since I haven't done a 10 in almost a year.  But I've been paying for it ever since, pretty pooped the last two days and a little sore!

Now for the "Dominican Stuff", if you've been reading this blog since the spring, you know that back in March I went with a group of students on a Dominican Experience (see blog entries from March 2010 if you're interested, lots of great piccys too!).  I knew before we even left, that I wanted to go back!  So this year I'm the lead organizer!  Since the school  year has started (and boy its only been two weeks!) I've been working on drumming up students to go, also working on the application/proposal that goes to the school board.  Boy that is just hours and hours of work!  Also I had a meeting with some interested parents tonight after work.  I'm very excited to be going back this year with a new group of students!

So my stitching has been falling by the wayside!  I have been working on this month's ornament since the weekend and finally wrapped it up tonight!  Its the final, in the series of three I've been doing. 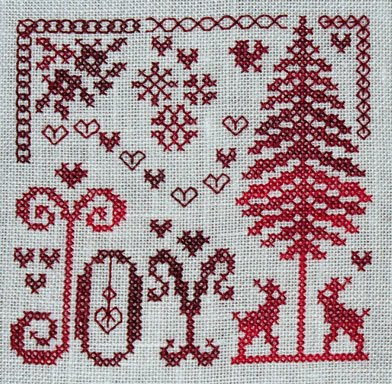 Joy
cR&P
Stitched on : 40ct linen
Stitched with: DMC 115
How about a "retro" PhotoHunt since I won't get this week's theme until Friday.  This one is from August of 2009, and the theme is "artificial" 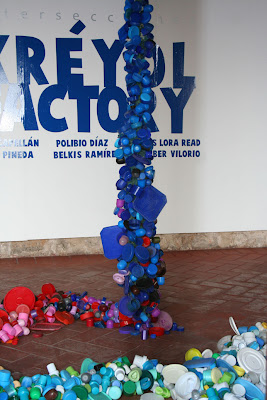 This photo was taken in the "Zona Colonial" in Santo Domingo, Dominican Republic this past March.  While walking around the tourist area I spotted this plastic "sculpture" through the gates of what appeared to be an art gallery.  This sculpture or piece of art is totally made from artificial materials.  In a strange way, I just love it!

Don't forget to enter my blogiversary draw on the previous blog entry by leaving a comment.
Posted by Dani - tkdchick at 11:35 pm

Labels: life the universe and everything=42, ornaments, Photo Hunters, photos, R and P

Wow! You certainly have a busy schedule coming up --- but, you know what --- there will be plenty of time for quiet things later.

Right now --- you've got some great things going on.

Well done for completing 10k. Another gorgeous ornament completed. Love your photo hunt. Good luck with all you have planned you are going to be busy lol.

Another beautiful ornament.
Sounds like you've been busy, with your run and the "Dominicaqn Stuff". How exciting to be going back, do you think it will become an annual thing?

Lovely ornament!
Goodluck with everything.

You have been a busy lady. The ornament is lovely. And I like the scupture as well.

No wonder you haven't had time to blog more, Dani, with all the things you have going on in your life!

Congratulations on both this week's weight loss and your 10K run! I love your little ornament, too--I need to get some DMC 115 and try that one myself.

You certainly are keeping busy!!! If only there were more hours in the day or days in the week...or if we all could afford people to do all the things that we don't want to do (like work and clean, etc, lol!)

Lovely ornament Dani. how exciting to be going back to the DR, I look forward to reading all about it. Well done on the 10K too.

At least your life isn't boring!!! So long as you enjoy it, keep going. Great news on the weight loss, and that's a lovely ornie

Great job! Again, I am so proud of you.

Sounds like you been busy. Congrads on the 10k.

You are a busy girl Dani, congrats on your 10k and weight loss.
Another beautiful ornie finish.

Lovely ornament Dani and congrats on your 10 k and weight loss.Well done girl !

Lovely ornament Dani and congrats on your 10 k and weight loss.Well done girl !

I don't see where you have time to do much anything! Kudos for teaching and running the 10K. Cute ornie!

With your packed schedule, I'm surprised you have ANY stitching time - but the ones you do are adorable!

Good luck with all the organising, i;m sure you'll recruit lots of folks wanting to join you on the trip.

Well done with the weight loss this week