Recently on good old FB, I drooled over the newest pair of Gingher Designer Series.  These new ones called "Jennifer" were a Jo-Ann's in store only exclusive.  When I first saw Jennifer I jumped online to find that I couldn't order them online.  Tracey and I decided we MUST have these scissors! 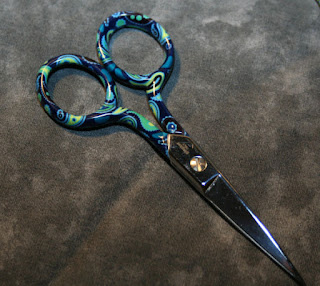 
First Tracey called our nearest Jo-Ann, which was in Ogdensburg, N.Y. and asked if they had any... because she had just been there the day before!  It happens that the scissors had been put out within an hour of her leaving the store.  They were kind enough to set aside three pairs for us (for Tracey, Christin and I) , usually they only hold items for 24 hours but since we were coming from the other side of the border, a 45 minute drive away they were kind enough to extend that a few days. 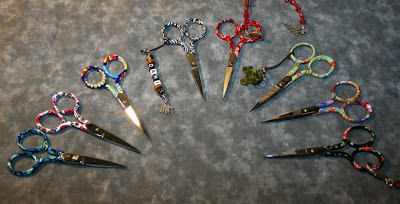 So call us crazy!  Tracey and I were willing to drive 45 minutes and into another country just for a pair of scissors!  We did make the drive worth our while by picking up a few other things in Jo-Ann and a trip to Wal-Mart as well. 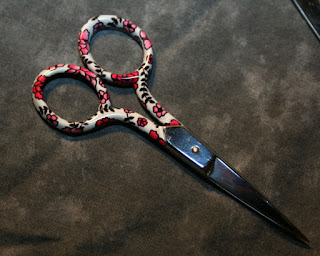 Not only have I recently gotten a pair of "Jennifer"s but back in September I got this year's pair of Ginghers (on sale in all kinds of places on line and in stores!) "Emily". 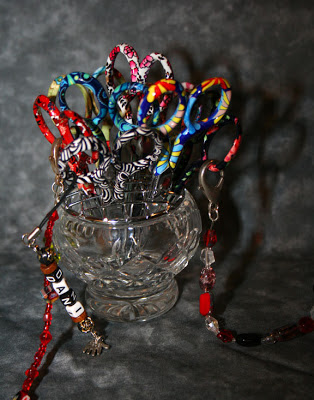 Here's my entire collection of Gingher Designer Series, beautifully displayed in the crystal scissor (flower) frog Leanne gifted me with to celebrate our 3rd "friendship anniversary".
Posted by Dani - tkdchick at 6:00 am

Love the scissors! So glad that I am not the only one who has several pairs!

You sound like me when I had to have that Margaret Sherry book that came out last year. LOL! Gorgeous bunch of scissors.

Your scissors are gorgeous! I LOVE Emily and might have to order them myself. It sounds like a fun trip to JoAnn's! :)

Wow what a beauties!!!

Such lovely scissors....I have made such trips, sometime 3-5 hours from our nations capital to find a stitching treasure, or sometimes just a missing thread colour....I cherish those trips...blog on Dani!

Love your story about your "trip for scissors". That's quite a collection you have. I don't think that I have ever noticed scissors like these at Joanne's. I'll have to pay more attention the next time I am there.

It's so unfair that the JoAnn exclusives are totally unaccessible on this side of the pond :-(

Your scissors all look great together!!

Great Scissors
Wish I had have known you guys were going.. would love to have had them too.
Oh well :(

Holy Cow! What an awesome collection you've got! I'm so jealous... :)

Thanks Dani for the heads-up on the new Gingher's. They seem to be issued later this year...usually Joann's has the new pair around September so I was wondering if there would be a new design or not. I picked up the Emily ones a month or so back. I have been collecting them for years but they are all sitting in a big box. I need to get a frog I guess or some way to display them. I'll be stalking the Joanns stores near me this week to find them!

Super collection of scissors - and such a great variety of designs.

What a great collection, I'm a big fan of these scissors but I only have three pairs.

A beautiful collection, sadly mine tend to be whichever I find first!

Wow Dani. Your scissor collection is awesome and they look great in the flower frog. I must be out of the loop. I don't have any of them. lol

What a grand collection. I most definitely have scissor envy right now...

Ooh--I think your newest scissor is my favorite, Dani! What a beautiful collection :)

Oooohhh, gorgeous scissors, and in my favorite color blue too. Somehow I've missed that these came out. Love your display of them, they look so colorful and fun all in the holder like that. What a lovely exchange you got from Angela earlier too, perfect for the season and so cute.
Sue

They are really pretty and the collection looks amazing

A beautiful scissors and such a great collection!

I love your scissors! I have given up. Every Joanns that I go into never has them.

Love your dedication to the cause :)

Never underestimate what lengths a stitcher will go to, to add to her stash, lol!

Love the scissor collection, they are so beautiful and bright.