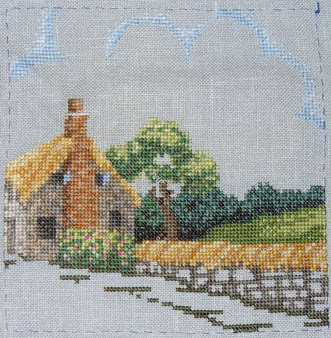 Sorry for no blog entry yesterday... I was exhausted.
I've been plugging away at Von's RR and hopefully should finish it by the weekend. Even if its not done by the weekend, I'll have to set it aside so I can get my Fair & Square exchange done. For some reason I thought the deadline was a little later in September instead of next Friday. I've picked a design I think my partner would like... but its a challenge because she's not a blogger so I can't go and read entries to get to know her tastes. I can only go by the brief blurb she gave. I need to make sure it'll fit the parameters set out by the rules and pick floss colours. The fabric selection is a no-brainier seeing as it has to be a 32ct linen in a neutral tones.
Exciting things are coming up for me socially. Yay! As I recently mentioned I've got my long weekend visit coming up with Kathy. I like to get in as much time with her as I can as she's a Snowbird and will be off to Arizona around Thanksgiving (the Canadian one). I can look forward to March though, she's invited me out for a visit again during March Break. Now to find the right priced flight. This time I'll go direct to Yuma, instead of stopping in San Diego for a few days (unless I find a flight to S.D that's such a steal that it makes renting a car worth my while).
Tomorrow evening me, my Mum and Christin are going out for a lovely dinner and to see The Phantom of The Opera! This will be my third time seeing Phantom (but its been more than 10 years since I saw it), Mum's second, and Christin's first. Fingers crossed that she'll be as awestruck with the production as I have been.
September 15th my Mum and I are going to see Genesis.
October I have two getaways planned. The first is a (I hope) long weekend getaway for me and Todd to the Ganenoque Inn. We've not been away together, just the two of us in a long time... we're overdue.
Then a few weeks later I'll be going back to that self same Inn, for the Cross Stitch Cupboard's Fall retreat where I'll be taking a class called Pomegranates and Pears from Jeannette Douglas.
Then finally, there's November when Ann of Knowledge and Needles holds her B&B retreat. This year instead of just one night, it'll be two. I'm so looking forward to all of these events.
I have to say the one I'm looking forward to the most is my long weekend getaway with Todd, I only just booked it today. I think Todd is looking forward to it too, its very hard to get him to agree to do anything or go anywhere. This time I just took the decision out of his hands, that an he has no excuse not to go.
Posted by Dani - tkdchick at 11:18 pm

Labels: life the universe and everything=42, round robins, stitching

This house is very beautiful!
It's always nice to have great things to look forward to! I am thinking of planning some too...
Take care!
Lili

Some great trips coming up! I'm seeing Genesis Sept 27-looking forward to reading what you thought of the concert.
-Jen

Your upcoming plans sound great :) Todd sounds a bit like my guy, and that's what I did - just booked it. We had a great time, and I'll bet you will too.

Good for you for taking that decision to go away! You need a little rest just from writing down this list of everything you have to do!

Way to go for taking control and booking a holiday :)
And don't feel bad...I have 2 square exchanges to stitch and I don't have one stitch in either of them...YIKES!

Sounds like you have some wonderful plans in the works. Enjoy and take pictures so we can live vicarously through you : ) Your stitching looks great, as usual !!

great progress on the RR's, Dani! Have a great time on your weekends away.

You are moving along great on the RR. And sounds like some great plans!!

Sounds like you are gonna be a busy gal! I hope you and Todd have a great get away:)

Dani, what an excellent choice for my RR!! It's looking great! :)

Enjoy your weekend away with Todd!

Those sound like great plans. You've got so much to look forward to there.

Your cottage is even prettier than last time. I love the detail in it.

some great trips coming up by the sounds of Dani :) I need to do the same with my DH sometimes and are thinking of booking a trip away for us for our 2nd wedding anniversary in October.

Hey, I've been to Ganenoque :) It sounds like you have so many lovely trips planned!

Von's RR looks great! And it sounds like you have a lot of fun things coming up!!

Hey Dani,
Hope you love your getaway to the Inn. It's my favourite getaway place. Do you have a fireplace room? My DH took me there for my 50th BDay and we've been there for a few anniversaries too. They have the wine chilling when you get there, chocolates, everything is so nice.
If you want an spa treatment of any kind, book it early. I waited till I got there last May and they were booked up even for a manicure.

The RR is looking fabulous. Can't wait to see your Fair and Square piece. Sounds like you have a ton of fun stuff coming up too - enjoy!

LOL, men are from Mars, didn't you know! They're all the same - you gotta kick butt sometimes to get them doing what you want them to!!