Its taken me awhile to get around to doing this post.  I think part of it was getting to the pictures!  Sometimes I get quite a bit uploaded and it takes me awhile to shift through it all!  Between you and I... I've got almost 20,000 image files on my computer! 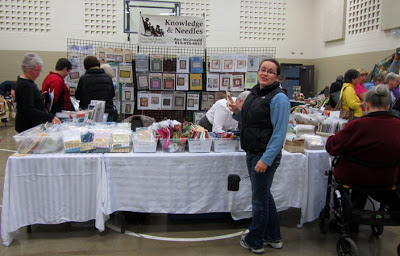 Tracey, doing what she does best!  Shopping!  At Knowledge & Needles of course!

On Saturday October 13th, I got up bright and early.  Christin and Tracey were joining me on a road trip to Kingston!  Our first stop was to pick up my magnificent quilt which I shared with you awhile ago.  Our second stop was at the Cataraqui Needlework Guild's Annual Merchant Market!  For some reason we were all quite excited for the day, all in good cheer and the trip down flew by! 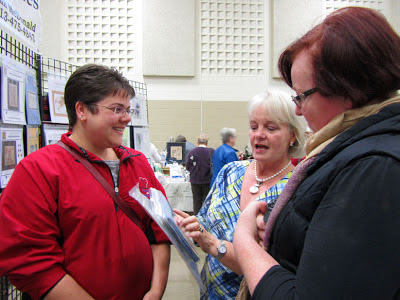 At the market we met up with Rebbecca and her friend Siobhan who had recently immigrated form England.  We also met with Lianne, Kathy, Barb, and Bonnie.  We shopped, mainly at Knowledge and Needles I must admit!  In my opinion the market was much smaller than in past years, but we enjoyed ourselves anyhow. 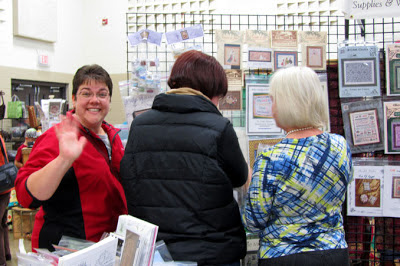 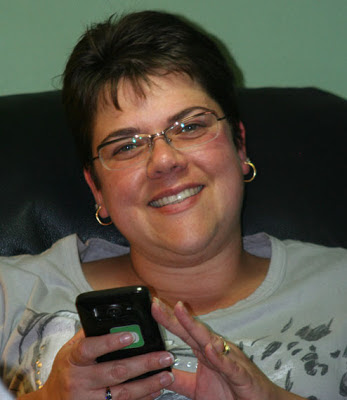 After shopping it was off to Rebecca's house for a day of stitching!  It was so nice to be among my friends again... especially Rebbecca, Kathy, Barb, and Bonnie who I don't get to see often enough in my opinion! 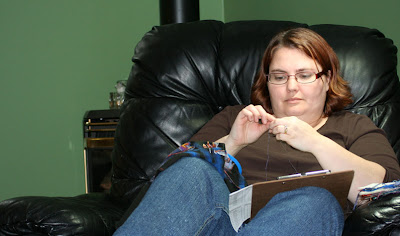 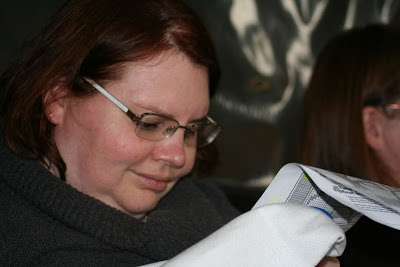 Christin working on a Wedding Sampler 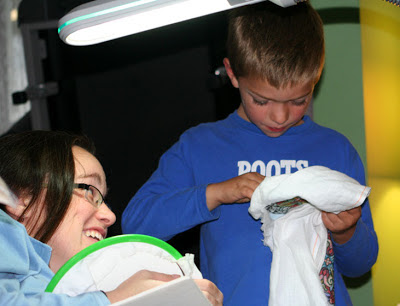 When Rebbecca was out of the room, her son Caleb decided to pick up her stitching.  Tracey was happy to teach him how! 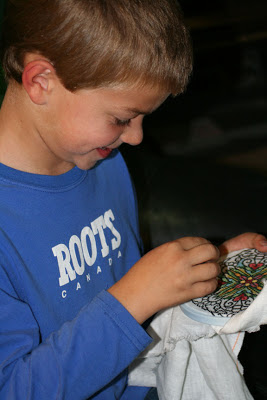 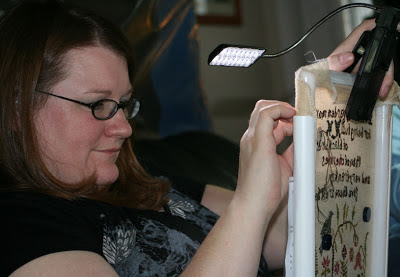 It was a lovely day that went by too quickly!
Posted by Dani - tkdchick at 6:00 am

Awww, it really look like you all had a lovely day!!! Heaven: shopping (cross stitch stash of course!) and shopping... What more do you want? Mii xx

Holy cow!! 20,000 pics...my youngest daughter, also a photo fanatic, has roughly the same. Another external hard drive is always on her wish list. I did not know about the show in Kingston...boo hoo...nice to see friends sharing a stitch day...blog on!

Glad you had a pleasant time shopping and stitching with friends ... how does the old American Express commercial go ... you know the one that calls the shopping experience good but the human experience "priceless" ??!!??

Great photos from your weekend away.

I hear ya... It seems we don't see each other as much this year!
Last night blair said we might get to go see Dani in December with a smile on his face... he is hopefully the NHL/NHLPA meeting goes well this week :) Even if there is no hockey, I might just have to make a road trip up if the weather is decent :)

What a fun day!

Sounds like you had a lot of fun! Always nice to be around others who share the same interest.

Looks like a gret day. Stash shopping and stitching - how does it get better than that?

How nice to catch up with old friends and meet some new ones!!