Over the Easter four day weekend, which was this month's IHSW I didn't get in as much stitching as I had hoped/wished!  I did manage to enjoy some time with some great friends! 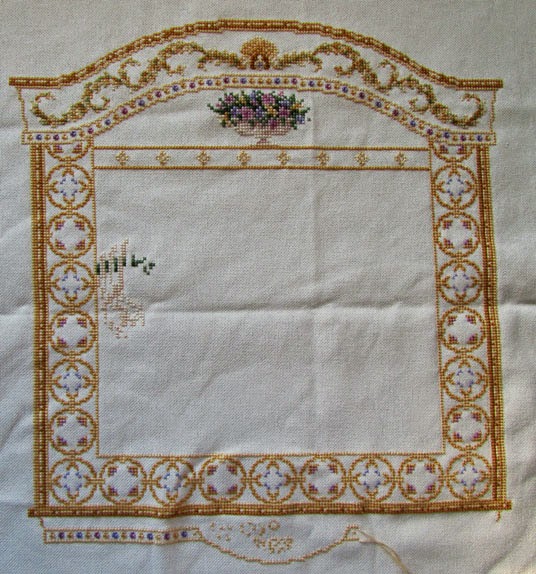 Here is my progress from the weekend, and what progress I could make over the last few evenings when I wasn't trying to sleep off the migraine I've been battling all week.  Teresa Wentzler's Birth Announcement is moving along beautifully AND I'm almost done all of the cross stitch in the border and I can't wait to hit the middle section!

I also stitched up two more ornaments from the Rosewood Manor Red Threads chart that I've done a few from lately.  A little while ago I've put a bunch of smaller off-cuts of fabric that weren't of much use for bigger projects aside.  So I've been using these up to make these ornaments with whatever overdyed threads I happen to come across... especially partially used skeins that were not bought for particular projects.  I've been also trying to use some of my Mum's beads in the finishing as well.  Of course I've not even put a dent in those!  I thought I had downloaded these off of my camera but I haven't so they'll have to wait for my next post.  I know, such a tease! 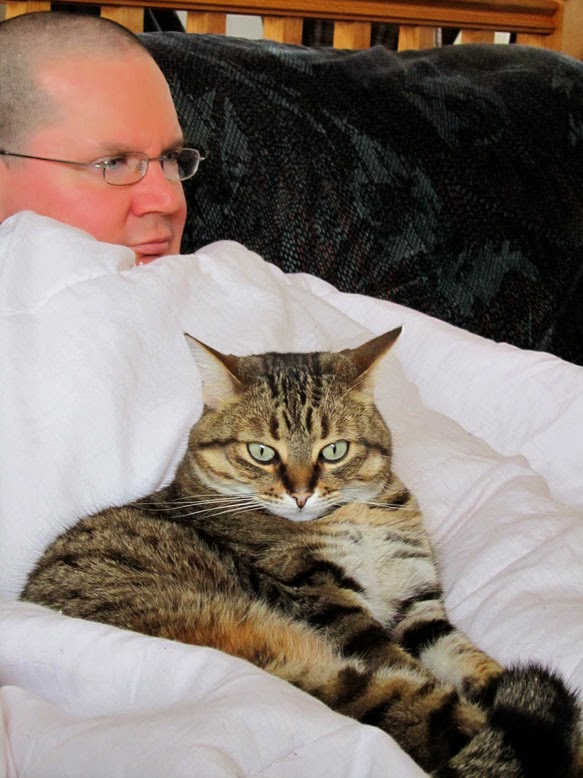 To top off this post, here's a super cute picture of Todd and Zeus chillaxing on the couch this past weekend!  These two are always as thick as thieves!  Todd dotes on her and she purrs like crazy the moment the two of them get together!  Its disgusting!
Posted by Dani - tkdchick at 1:16 pm

Great progress Dani! And Zeus is getting big!

Wonderful progress Dani. Love the pic of Todd and Zeus.

You are doing speedy-quick on that TW! Wow! Your sewing needle must FLY!

Zeus is gorgeous! Love your TW sampler border - stunning. You made lots of wonderful progress on her.
love Annette

Oh my gosh! Zeus is shockingly beautiful....and Todd is cute too. :) You are making great progress on the the birth sampler! Can't wait to see those ornies that you finished.

Wow! You are making great progress! Zeus is adorable!

That really is a great photo of Todd and Zeus, Dani--how nice that they are so close! And what great progress--I'm sure you're glad the border is finished and you can move on to the "fun stuff!"

The TW wip looks beautiful. Love the pic of Todd and Zeus. They do indeed look like trouble.

The birth sampler is gorgeous. There's so much stitching in the border. What a beautiful cat.

Your TW design is Awesome! I don't think I have ever seen that pattern. Love her designs and Love how your stitching is coming along. Cant' wait to see this one finished. Great work.

Your TW is coming along nicely.
Guys and girl cats, gals and boy cats... Usually, anyway. I read somewhere that it is linked to pheremones. They certainly look comfy in that shot. And zeus is looking gorgeous

With such a pretty border, I can't wait to see the middle section. What gorgeous eyes your little girl has! She looks like one contented feline there!

Oh my, such wonderful progress on the TW piece. A really productive weekend.